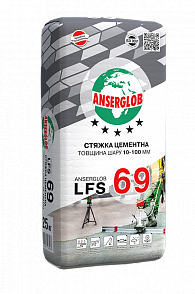 * When making a screed with a thickness of more than 40 mm, it is recommended to add a large filler (fraction of 5-10 mm), in a volume not exceeding the volume of the dry mixture. The amount of water for the preparation of the mixture and the compressive strength of the resulting screed with aggregate will change.

Next
Consumption
calculator
Colors
catalogue
Product certificates
Cement screed ANSERGLOB LFS 69 is designed for leveling, repairing bases made of concrete or cement mortar for subsequent laying of the topcoat. Cement screed ANSERGLOB LFS 69 is used for the preparation of substrates in public and residential premises for self-leveling mortars, or for various following topcoats, such as linoleum, carpet, laminate, ceramic tiles, natural stone and others. ANSERGLOB LFS 69 is used for connecting, separating, floating underlays or in underfloor heating systems. Due to its composition, the mixture is easily leveled and forms an even surface. Can be used inside and outside buildings.
Preparation of the base is carried out in accordance with DSTU - N B A.3.1-23: 2013, SNiP 2.03.13-88 and DSTU-N B V.2.6-212: 2016. The base must be strong, dry, free from dust, dirt, bitumen, fats, oil or emulsion paints. Before applying the mixture, fragile areas of the base must be carefully removed. The cement surface is cleaned from cement laitance with a steel brush or sandblasting machine. Thus, the adhesion of smooth surfaces is increased. Cracks in the bases must be opened, treated with one of the deeply penetrating ANSERGLOB soils and filled with ANSERGLOB LFS 69 mortar. Before work, highly absorbent substrates must be treated with one of the deeply penetrating ANSERGLOB soils and let stand for 4 hours. Insufficient quality of preparatory work can lead to delamination or cracking of the laid layer.

Prepared mortar mixture on the base and spread it over the surface using shovels or other tools. After that, compact and smooth with a power tool (vibrating screed, vibrating plate), or manually using the compaction rule with smoothing. A piston or screw pump can be used to supply the solution. When creating a "floating" floor, the minimum layer thickness is 40 mm. When used on a release layer, the application thickness is at least 35 mm. When used in underfloor heating systems, the layer thickness must be 25 mm higher than the upper edge of the heating pipes; the system must be filled with water until the mixture has completely hardened. All work on the preparation, distribution and leveling of each portion of the solution must be carried out within 1 hour. In case of breaks in work for more than 1 hour, the tool and equipment must be cleaned of the solution and rinsed with water. The hardened mortar can only be removed mechanically. When applying the mortar and during its hardening, to prevent cracking, it is necessary to avoid the appearance of drafts and overdrying the mortar. On an area of ​​more than 14-16 m2, as well as at the joints of various rooms and the abutment of the screed to the supporting and enclosing structures, it is necessary to perform expansion joints. Existing expansion joints must be duplicated. Subsequent work, depending on the hardening conditions, application thickness and residual moisture content of the base (no more than 4%), but not less than 7 days for laying ceramic and stone tiles and 14 days for laying linoleum, carpets.

Note: Application should be complied at temperature above +5°С and below +30°С. All the mentioned recommendations are effective at temperature of +20°С and air humidity of 60%. Under the other conditions crusting, stiffening and curing time may be changed.

Average consumption of the mixture is 1,9 kg/m2 at 1 mm layer thickness.
The dry mixture must be poured into a container with clean water at the rate of 0.13 - 0.18 l of water per 1 kg of the mixture (3.25 - 4.5 l of water per 25 kg bag) while stirring manually or mechanically (with a drill at low speed ) until a homogeneous mass with the required consistency is obtained. After 5 minutes, the mixture must be re-mixed, after which it can be used. An excessive amount of water entails a deterioration in properties, and also reduces strength and can lead to its delamination, which is unacceptable. 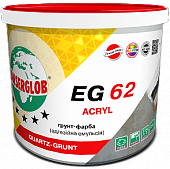